There’s something so special about the original The House of the Dead games. A zombie B-movie is a perfect plot for video games, and the series is never shy to dive into the campy, cringe, and confusing sides of the performances. The House of the Dead is known for its outlandish dialogue, stiff vocal performances, and the truly insane plot that sequels only escalated further.

Two agents are called to investigate reports of violence at a scientist’s house, and within moments, the gates of hell are truly open, as swarms of zombies attempt to stop you from discovering the true intent of the mad scientist named Curien. SEGA originally released the game for arcades, before making ports for PC, Dreamcast, and even the Wii. The House of the Dead is a lightgun game where you need sharp reflexes to keep up with the quick gameplay and to hit your targets in time.

It also offers an interesting twist on the lightgun genre, with several different routes available depending on which items you shoot. Firing lead into a padlock, removing an enemy blocking a path, or even destroying a bookcase to discover a secret tunnel, there are quite a few ways to approach each level, making THOTD perfect for replaying. So, how does this arcade classic perform on Switch? And does this remake bring the original title back from the dead?

It’s great to look back at the history of The House of the Dead and to think that it still holds a place in the cultural zeitgeist. While the zombie trope is really starting to wear thin nowadays, we’ve had some successful parodies and subversions of the genre over the years, but the House of the Dead likely beats them all to the punch. Knowingly camp and cheesy, this fast-paced lightgun on-rails shooter is a knowing nod and a wink to the work of Romero et al, and it still holds up. 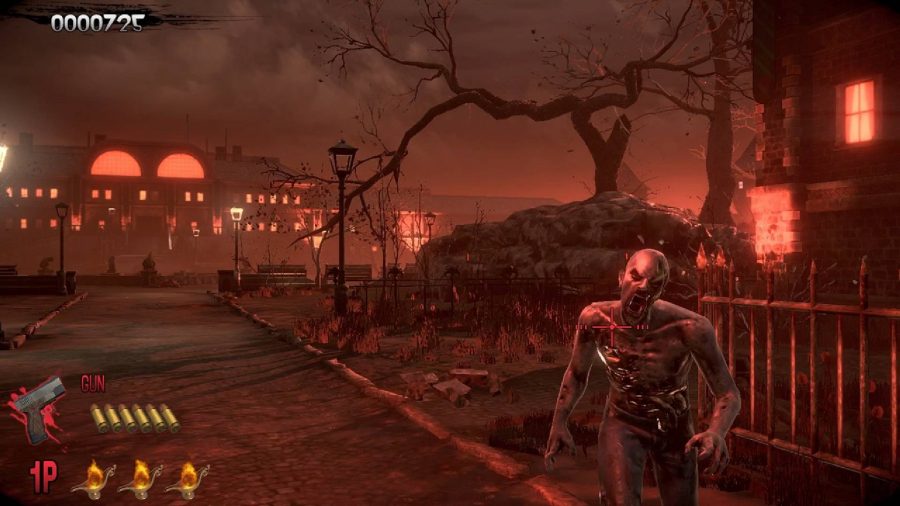 If you’ve never played it before, The House of the Dead is a fairly short zombie shooter, given longevity by its addictive arcade gameplay, unlockable branching paths to keep new runs fresh, and the ability to chase high scores by nailing every single zombie in your path. You can also increase your score by finding secret bonuses hidden in crates, pots, and other tricky places, as long as you’re fast enough.

Each zombie is pretty tepid cannon fodder, shambling around just waiting for you to unleash a wave of bullets into their green flesh. As you progress, you find some trickier opponents, as large zombies start wielding chainsaws, tiny zombie worms jump out of a bed, a flesh-crawling torso drops suddenly from the ceiling, and even some bosses appear with minuscule weak spots that truly test your aim.

Honestly, half the charm of the game is its janky models and awful vocal performances, and I’m not sure it needed a remake as much as just a rerelease with some improvements to the framerate, like the recent releases of Quake and Turok for Nintendo Switch. Sadly, I think I am right on the money. The House of the Dead: Remake isn’t a bad game, but if you have access to the original in any form, it’s gonna be hard to justify dropping cash on this version. 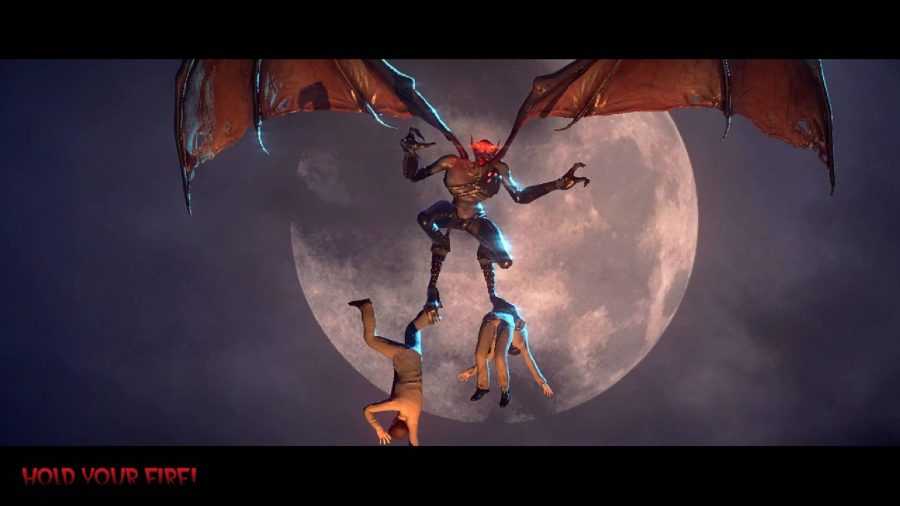 Developed by MegaPixel Studio, the team behind other recent SEGA remakes such as the Panzer Dragoon: Remake, this remake has rebuilt the assets from the ground up, while keeping them fairly consistent with the original vision. Improved models, textures, and lighting effects seem to be the reason behind remaking the title, and while there are issues with the muddy colour palette letting some enemies disappear into the backgrounds too easily, it generally looks fine.

The main draw here is that the lightgun action of the originals is mapped to the Switch’s motion controls, either using two Joy-Cons and holding the right like a tiny lightgun, or by holding the Pro Controller and adjusting the reticle by shifting it. Put as simply as I can, this works, but it could be so much better. While using the accelerometer inside the Joy-Con will never give the pinpoint accuracy of the Wiimote and sensor bar, there are still times when it feels steady and accurate, in titles such as Splatoon and Breath of the Wild.

The motion controls in the House of the Dead feel loose and wild, even at the lowest sensitivity. I tried playing around with the parameters like sensitivity and the dead zones, and while I managed to wrangle the unruly cursor somewhat, it never feels accurate enough to work with such a fast-paced and demanding lightgun game. Half the fun of The House of the Dead is just going through repeatedly, taking out zombies with headshots, finding secret coins in pots you only get a glimpse of for a brief moment and wrecking bosses with pinpoint accuracy. No control method on offer here lets you feel like the ace of the arcades from your youth. 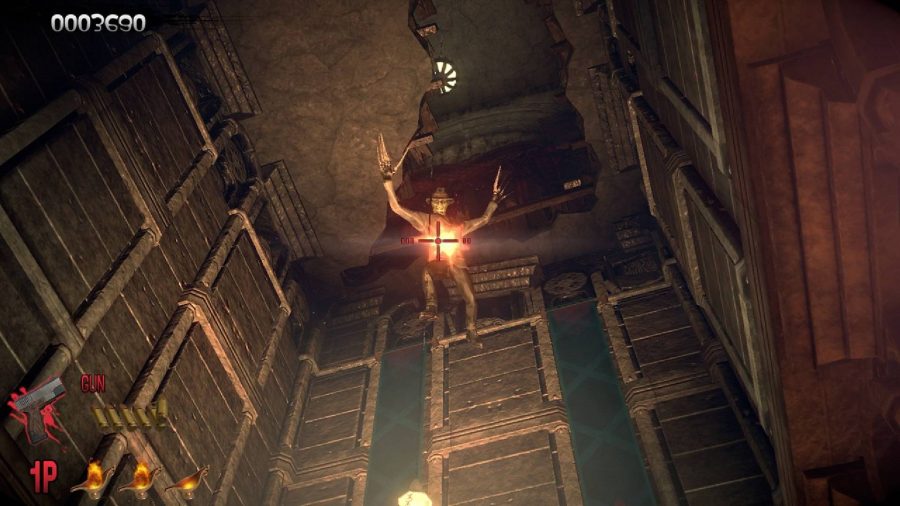 As well as feeling too loose, the button mapping also feels lacklustre. When you use two Joy-Con, you’ll find that you can shoot with either A or ZR on the right controller. The regular handgun has five rounds, meaning every few shots you’ll need to press B on the same controller or ZL to reload. Fine. Then, the button to recentre the reticle when using motion controls, which you need to use a lot, is mapped to R3, which means pressing in the right analogue stick on the Joy-Con this is fiddly anyway, but attempting to do this while you’re also dealing with shooting and reloading, all on the same side of the controller? It’s awkward and cramped and genuinely hurts. I highly recommend turning on auto-reload to save your hands.

Eventually, I went into the Switch’s settings myself and mapped the recentre option to ZL which alleviates some issues, but it just feels like MegaPixel should’ve noticed this through QA, to begin with, or at least some sort of button mapping would be great. Coupled with the disappointing motion controls, this is already not an ideal way to play this game, and I can’t ever see myself completing it on hard mode, as battling these controls is harder than the hordes of zombies. You also get extra points if you can save wandering scientists in House of the Dead, and let’s just say that my bullets are very uneven in the justice they deal. Sorry scientists.

Another issue is with the performance. While there’s the option to choose a performance mode, things could be better. The action runs fairly regularly at 60 FPS, but it does dip occasionally, especially in later levels when things get a bit frantic, and during the packed horde mode. Also, while MegaPixel clearly updated the graphics, I can’t say that they look… better? The originals, for all their issues, are bright and colourful even despite the blood and gore, and enemies are very easy to spot.

your firing finger will truly get a workout

Here everything has a muddy texture even in the more visually different areas, and once bright enemies now blend into one another. Similarly, the soundtrack is clearly taking what worked about the original but just feels like a drab reimagining. I really would love options for both the original graphics and soundtrack.

As for the actual changes to gameplay, this console remaster brings over local co-operative and competitive multiplayer, meaning you can either work with a friend to unleash lead on zombies or compete for a better high score through the campaign. This a nice to see, as I’m sure most of you who played the original in the arcades cherish fond memories of passing the second gun to a mate and ploughing through the undead together. There’s also a horde mode, which simply pumps way more zombies into the campaign, meaning your firing finger will truly get a workout. 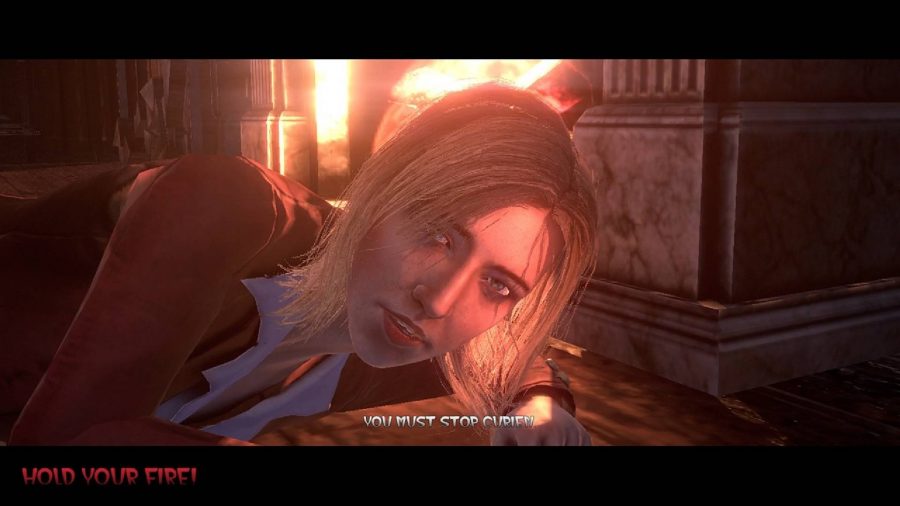 Luckily, there are difficulty options as well, so if you just want to peacefully dispose of crowds of undead creatures, you can enjoy the campaign with little worry of completely wiping out. Easy doesn’t slow the game down, so you still get swiped by the occasional zombie hidden behind a cupboard or trap door, but you’re less likely to need to start over from scratch. If you run out of continues you don’t need to put in extra coins, instead, can sacrifice points from your high score to head back into the fray.

Playing through this title all over again I’m reminded of why it was such a success, unloading lethal doses of lead into the undead will always be fun. You need to pay attention to weak spots, wandering scientists, and tricker tiny opponents, when you eventually get along with the controls you can just enjoy classic arcade shooting action. Even now I’m discovering new hidden pathways by trying to shoot things I hadn’t noticed before.

As a huge The House of the Dead fan, I managed to wrestle the controls and performance issues to make this work for me. The arcade classic is still a blast, with waves of zombies just waiting to meet the death-end of your bullets, while you explore hidden paths and obliterate hidden pots for a few extra points. To anyone else, I just don’t know if I can recommend this just yet. The original The House of the Dead can be a 30/40 minute game, so for the price of this package, it’s disappointing that one or more of the sequels isn’t included. 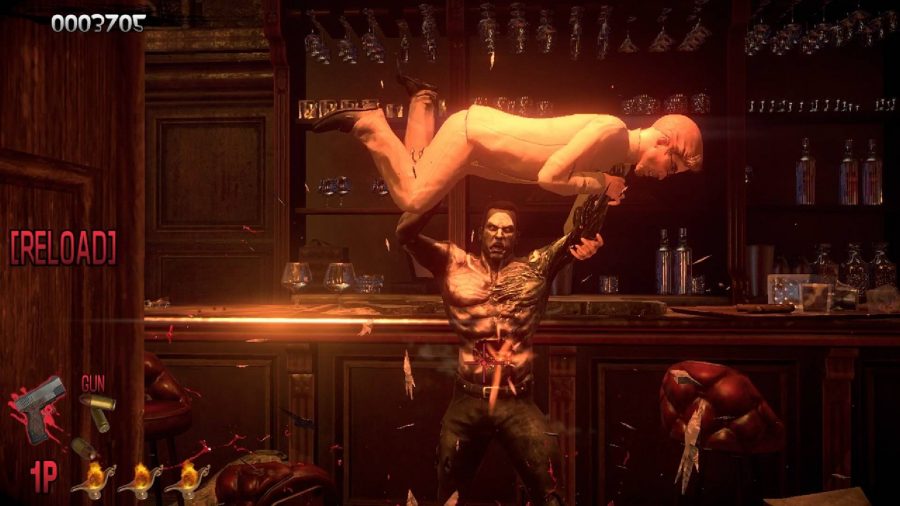 I can’t deny that I had fun though, as the selling points of the original are all here waiting for you to experience. I hope updates can sharpen things somewhat, and I cross my fingers that any remakes of sequels also put a bit more care into things. For any The House of the Dead fan looking to relive the glory days, maybe you should wait for a sale and a couple of updates, the House of the Dead: Remake is almost a decent way to experience a true classic of the on-rails shooter genre.