We’ve been looking forward to this Switch port, so we’re happy to bring you our Nobody Saves the World review for Nintendo Switch today. Drinkbox Studios is the powerhouse behind recent hits like Guacamelee 1 & 2 and Severed, and its latest achievement takes the trademark brand of humour and tight action to new heights.

Nobody Saves the World is an action RPG title where you play as Nobody, literally. The game starts with you as an amorphous white blob of a being known as Nobody, and only when you discover a magic wand can you begin to transform into a bevvy of different forms, each with their own attacks, abilities, and status conditions. So is this dungeon-crawling crusade a confident conversion for the Nintendo Switch? Well, let’s find out in our full Nobody Saves the World review.

Played from a topdown perspective, Nobody Saves The World is an action RPG with a gorgeous cartoon style. It uses thick black lines, angular shapes, and bold colours to great effect, with fantastic character design for everyone, including NPCs, enemies, and a huge array of transformations. The title looks like a Saturday morning cartoon brought to life in the best possible way.

If you know nothing about the title, the brief synopsis is that a calamity has fallen over the land, and a famous wizard is missing. When you, a nobody, find the magic wand, it’s up to you to slowly build up your abilities to transform into different and more powerful creatures and use these skills to scour the land, defeating hordes of enemies in multiple dungeons. All until the calamity is ultimately thwarted. It’s pretty by the numbers, but Drinkbox Studios’ penchant for witty humour and great characters shines through in every line of dialogue. 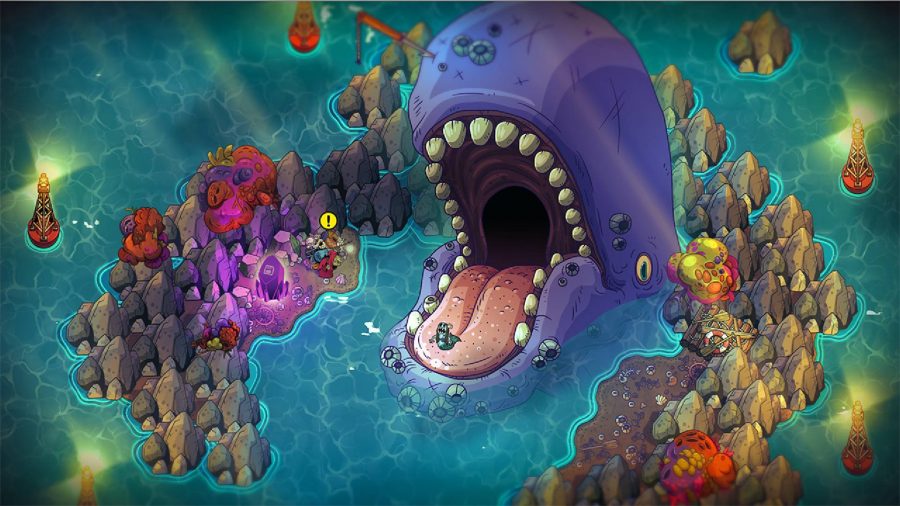 Abilities start small, with simple forms like a rat, a guard, and an egg among the very first few you unlock (quick note, if I had one tip for this game, it would be to get the egg as soon as you can. It makes something much easier towards the end of the game). Each form comes with quests that grant XP both for your form and character. For instance, a quest such as simply using your signature form attack grants you XP, then later, the quests are more complicated, as you must utilise a combination of the new moves and status effects you unlock.

Improving your form grade (from F to S) and levelling up work fantastically in tandem. Eventually, you unlock new moves for your form as you progress, and levelling up offers you more slots for moves in the long run. You can even mix and match moves and abilities from different forms, utilising your favourite skills from one to improve another. While you start out as the simple rat gnawing away at foes, eventually, you’re a powerhouse of status effects, ranged attacks, and powerful specials that shake the room.

You need all of this as well, as Nobody Saves the World doesn’t pull punches. Status effects are all fun and games (poison, stun, fear, etc) when you’re using them, but they can all be used against you and are done so generously. Luckily there are fairly frequent save points in the form of giant glowing purple crystals, but you’re going to be dying a lot as you experiment with forms and face the different parameters of dungeons. 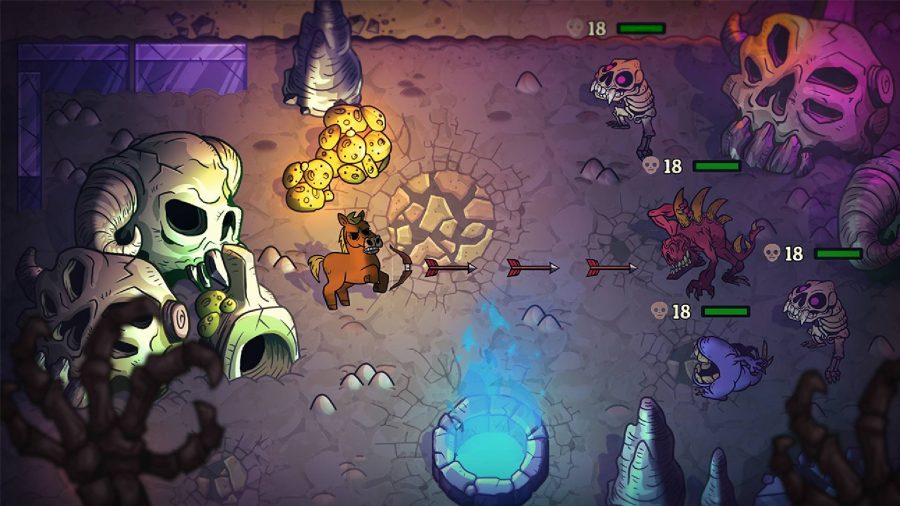 While enemies gradually increase in level alongside you, dungeons also change the conditions of battle to shake things up. Some increase the cost of mana used for special moves, others deactivate knockback, so every foe stays right on you, and one dungeon even makes every attack do 9999 damage, effectively making it a one-hit-wonder where any damage means death.

The beauty of this ever-changing array of both enemies and conditions is that it works perfectly in tandem with your steadily evolving library of forms, attacks, and passive abilities. For the dungeon where enemies don’t get knocked back, it’s much better to use ranged attacks. So while I enjoyed the speed of the horse form, I slapped on the arrow attack of the ranger to keep enemies at bay while I still had the freedom of movement. This is the tip of the iceberg as well, with countless possibilities hidden behind the many abilities of each form.

It also means that there’s always something to do, with your objectives constantly being updated with both form-specific and general tasks waiting for you. As well as forcing you to experiment with the forms to level up, the general tasks such as open chests, beating bad guys, and consuming health items, give a steady drip-feed of XP that ensures you’re always working towards something. If a dungeon is proving a bit too tough, heading back into the wilderness to defeat some overworld enemies can still be fruitful, meaning no second of this game feels like fluff. 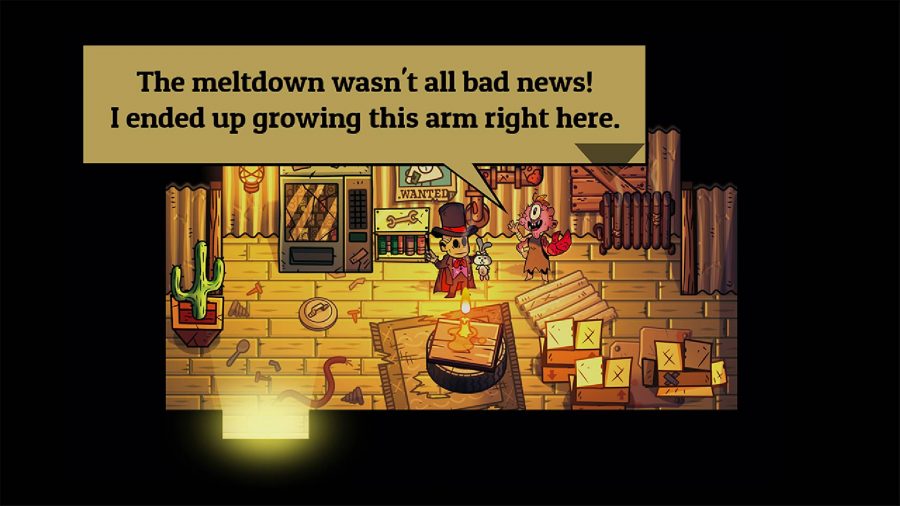 Another key to this game’s success is the world itself. Every dungeon you enter is randomly generated and changes again after every death. The overworld, though, is a well-designed map that utilises gates, shortcuts, and the many abilities of the different forms wonderfully. As you unlock new forms, new areas become available to explore, as using a form like the turtle suddenly means you can swim in water. You loop back around fairly regularly to unlock shortcuts as well, so this aggressive and confusing world slowly reveals its secrets as you master your abilities. I’m still nowhere near uncovering everything, and I can’t wait to uncover some of the crazier challenges hiding away.

I’ve become fairly addicted to Nobody Saves the World over the last week, and while everything I’ve described is a factor, the secret ingredient is an incredibly satisfying game feel. I cannot imagine the amount of balancing that went into making sure that every form, different type of attack, and the movements of each of those, all felt satisfying and snappy. Even the very first form of the rat still feels great ten hours later, with plenty more forms under your belt. Whether you unlock the ranger’s dodge, the guard’s stomp, or the horse’s gallop, it all feels great. Every new move and form is a gleeful opportunity to bring a brand new dose of pain to your opponents. You even upgrade each ability with in-game currency over time, unlocking even more permutations.

The later abilities also bring a lot of fresh ideas, even hours into the campaign. There are a couple towards the end that had me cackling like a maniac as I unleashed hell on enemies. Though the baddies always brought the pain straight back, increasing in difficulty and numbers steadily so that later dungeons are a mad scramble to defeat these hordes of mutants. If I had a couple of small niggles, I’d say that there could be more variety when it comes to enemies, just to shake things up a bit. Bosses are fun, but they’re mostly regular enemies with huge health pools, so some other beasts to face would be cool. 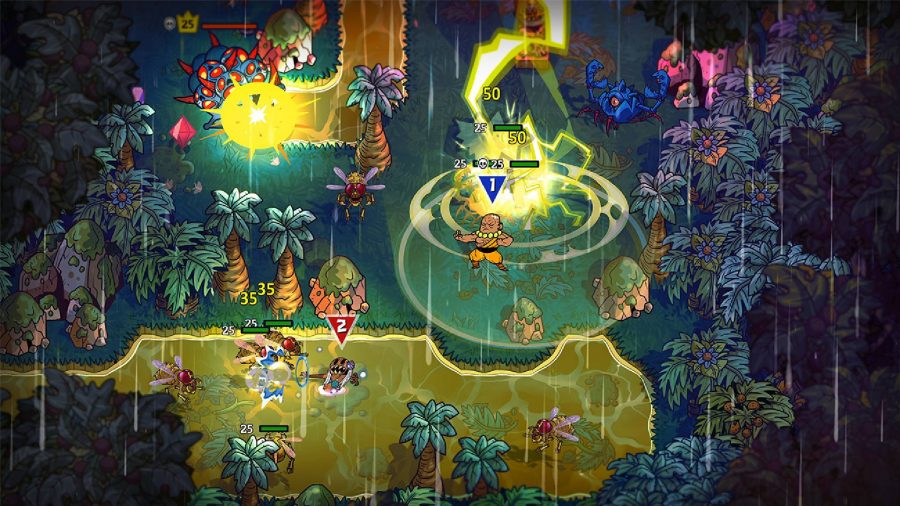 Secondly, the waves of enemies mean it can be very easy to lose yourself, especially with two players. A small triangular icon pops over the player occasionally to show your location, but I’d prefer a bright outline or something similar. Small forms especially can be a nightmare to find amongst the waves of enemies and corpses you’ll soon amass, and while I couldn’t test it, I imagine anyone playing on a Switch Lite will struggle even more.

Classic dungeon crawling always feels better with a pal, and thankfully you can do that both locally and online here. Local is a simple drop-in multiplayer activated at the touch of a button. The second player joins at the level of the main player, all their unlocked forms and all, and they have the same abilities to quickly pause gameplay and fiddle with their moves to find their favourite techniques. Online isn’t quite so simple, as you invite players from the main menu, though it was fairly seamless in our testing. It even makes use of the Switch’s invite feature.

Sadly, one disappointing element we found was that if a disconnection occurred, both players were booted out, back to the main menu, and all unsaved progress was lost. Considering we were several floors deep in a dungeon we’d been exploring for about 30 mins, we were a tad miffed. It would have been nice if at least the main character had been able to continue playing as they were, without the second. It also seems like the second player doesn’t earn anything for their character in their own playthrough, which is a small but annoying gripe. 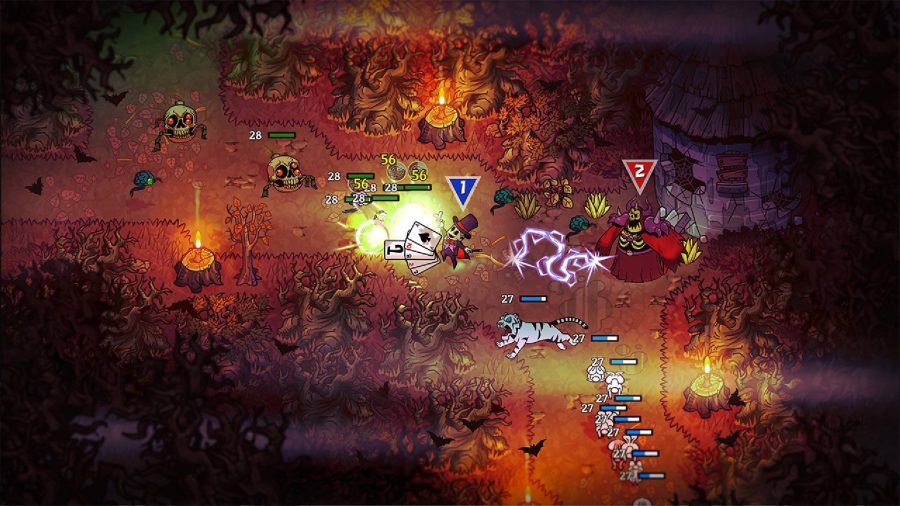 While I had minor gripes, ultimately, the sheer joyful anarchy of Nobody Saves the World kept me playing, and the steady drip-feed of new forms, abilities, and increased power by levelling up, meant I was well and truly hooked. It’s probably about a 30-hour title if you run straight for the end, but there’s enough challenge in the variety of enemies and dungeons that it could take you longer. Not to mention there’s so much to do outside the main campaign, with an array of funny side missions all waiting to be discovered, with each rewarding you with either more XP or heaps of cash.

If you’ve already played Nobody Saves the World and are thinking of diving back in, you’ll be pleased to know that it’s made the jump to Switch flawlessly. The gameplay never stutters or slows down, aside from the odd very chaotic moment in online multiplayer, as far as my own tests go. Everything looks crisp and colourful, with the vibrant style a perfect match for the Switch. In fact, I was very impressed with how well the game’s art and the action looked on the OLED. The thick black lines of character designs and the dark, ominous depths of the dungeons just popped out of the screen. 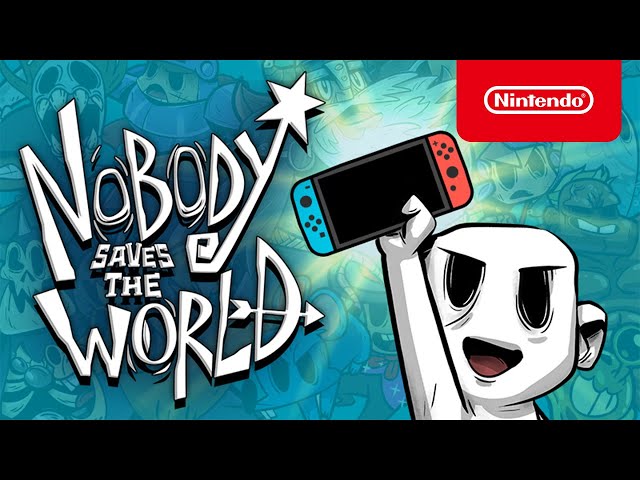 With satisfying and approachable gameplay, and a huge depth of abilities, attacks, and threats to face, I struggle to think of people I wouldn’t recommend to play Nobody Saves the World. The is classic dungeon-crawling given a fresh twist with its earnest and wacky sense of humour, amazing form system, and an almost endless amount of ways to play. I wish multiplayer was a touch more refined, and I often lost myself in the middle of battle, but with gameplay so smooth and addictive, I was rushing back for more in moments.