It’s hard to pinpoint exactly what Bugsnax is. Equal parts monster taming collect-a-thon and narrative-driven mystery investigation, it’s a title that stands out from the crowd in just about every sense of the phrase. So, how did we get on with our debut voyage to the isle of munchworthy monsters? Take a seat, pop your tape recorder on, and let’s get into it.

I have to start this by saying that for me, it really was my debut voyage. As fascinated as I’d been by the hype surrounding the title when Young Horses released it for Xbox, I had no way of playing the game, and besides other members of the Pocket Tactics team telling me how great it is, I’ve seen little review coverage either. That is to say, I am a Bugsnax virgin.

So, I went into the game not knowing what to expect, and I can wholeheartedly say that I had a glorious time. Grumpuses? I love ’em. Bugsnax Island? Perfect holiday destination. Bugsnax themselves? Tasty. Can’t get enough. Everything is so inviting, with all the design elements coming together for a playful and charming game world that welcomes you with open arms. Still, it’s the questions that lurk underneath that keep you hanging around.

The writing throughout almost the whole experience, be it in passing conversations or key cutscenes, is absolutely top draw. The characters too are a delight, with no dull moments in Snaxtown once the area is at least half repopulated. Here, Bugsnax seems to know its own strengths, and the tidbits you pick up over time turn the residents from caricatures into friends that you’ll hate to have to leave behind. 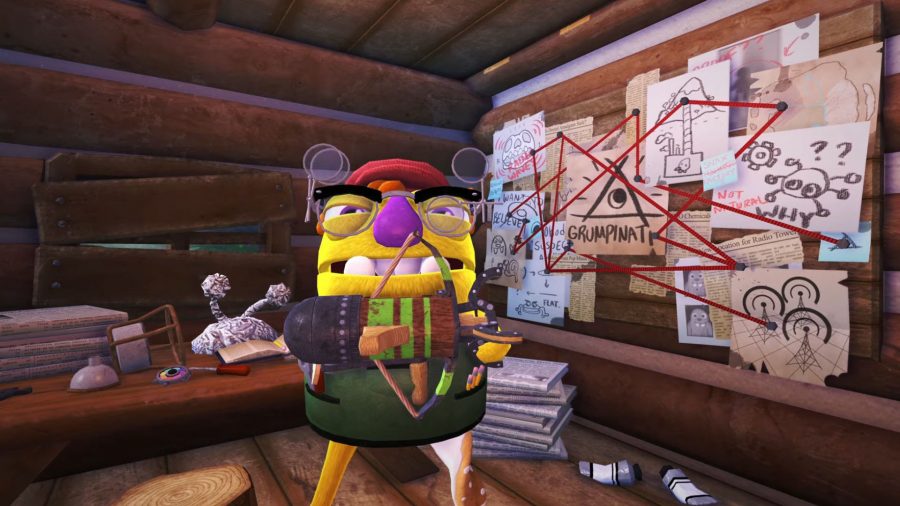 These characters are essential to the relatability of the game, and its emotional core. Almost like how if you pour through enough horoscopes, you’ll find something representative of your experiences, if you spend enough time with the Grumpuses of Snaxtown, you might find out a little something about yourself.

I am a Filbo, passive almost to the point of no return, desperate to impress, and terrified at the prospect of conflict. Fortunately, I don’t have a pickle for a nose. I’m sure that by the time you meet each Grumpus, you’ll find yourself too. That’s where there’s a sort of irony in the title, for a narrative about monsters fresh out of the imagination of a seven-year-old munching on sentient snacks, Bugsnax is incredibly human.

At points, Bugsnax genuinely shocked me with how real it and its characters were willing to get.

That word is bandied about a lot now, but what I mean by human is that it isn’t a distraction piece full of faceless enemies, non-feeling protagonists, and empty dialogue. It’s an exploration of what it is to feel, and to think, almost like Pixar’s Inside Out, but you have to guess each emotional representation.

Of course, it’s not just yourself that the townspeople have to get along with, it’s the dynamics between each of them that really bring out the heart of the game. Each character has an elaborate backstory, and there are more than a couple of star-crossed lovers who call Snaxtown home, meaning you’ll have front row seats to both domestic bliss and relationship hell. 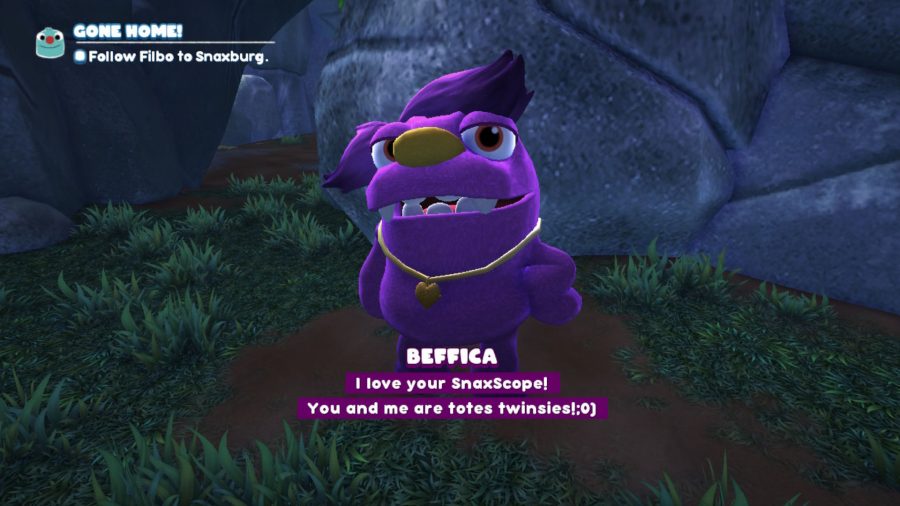 For the most part, love prevails. You can see this open-heartedness is a core tenet of the philosophy of Bugsnax, and it’s a real breath of fresh air to see not just heteronormative relationships in Snaxtown, but more progressive and true-to-life companionships, that don’t feel for one second like they’re virtue signaling, or trying desperately to appeal to a set demographic.

That’s not to say it’s full of the warm fuzzies. At points, Bugsnax genuinely shocked me with how real it and its characters were willing to get. This willingness to engage is what drove me through to the end of more side quests than I needed to complete, just for the emotional pay-off that came with the climax of each of the Grumpuses individual plotlines, as well as other reasons I’ll get into later.

You might realize that at this point, I still haven’t mentioned the aim of the game, the name on the tin, the reason for being, the Bugsnax themselves. In all honesty, for me, it’s a bit of a mixed bag. Don’t get me wrong, Bunger is a classic from the off, Daddy Cakelegs is inspired character design, and Strabby is as cute as anything I’ve seen in a monster collecting game (and I’ll die on that hill). 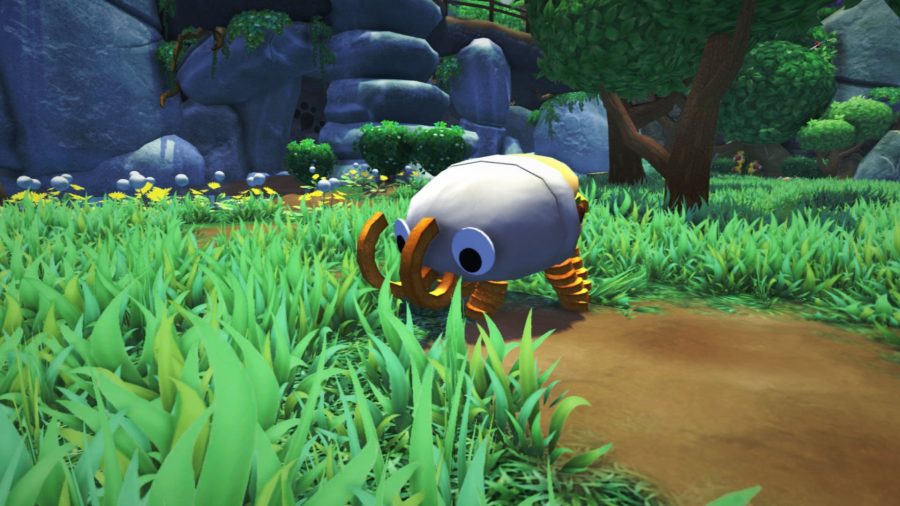 But on the other hand, there are more than a couple of forgettable designs. I’d need some serious prompting to recall the look of a Spuddy, or a Cheeser from name alone, and the third example you should have read there I simply forgot about entirely, both in terms of name and design. Still, every first generation has its hang-ups, just ask Jynx from Pokémon if you don’t believe me.

The number and variety of designs make it so that the odd disappointment is more than made up for by some of the favorites we mentioned before. Not only that, but regardless of their look, Bugsnax are fun to interact with, and there’s enough care to detail in their AI to give them both personality and an understanding of their habitat, so it really does feel like a wild excursion. 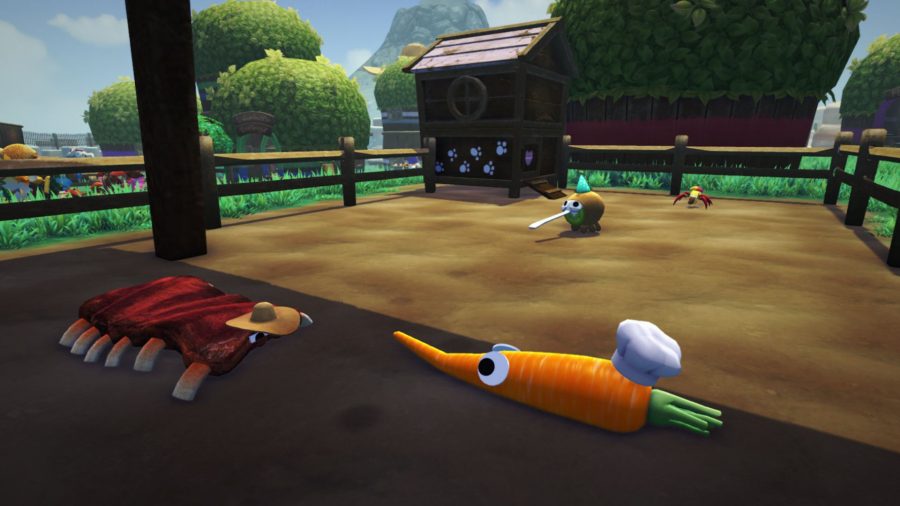 The catching mechanics are varied, and there’s a good bit of scope to use your imagination with them. You might find, as I did, that in the early part it can be a struggle to figure out how to get the crunchy critters incapacitated and in your trap. I had to ask a friend for some tips, but once you get the hang of it and master one or two biomes, all your skills are transferable across the different areas of the island.

Once you’ve caught some Bugsnax, you have to figure out what to do with them, and it turns out that most of your missions consist of feeding the townspeople. I found mixed results with the cosmetic consequences of me feeding my Bugsnax to the residents, each of them transforming their extremities to resemble their most recent meal. While Wiggle really does rock a pineapple crown, Filbo walking about the place with a drooping pickle for a nose is frankly, just obscene. I mean, look at it. 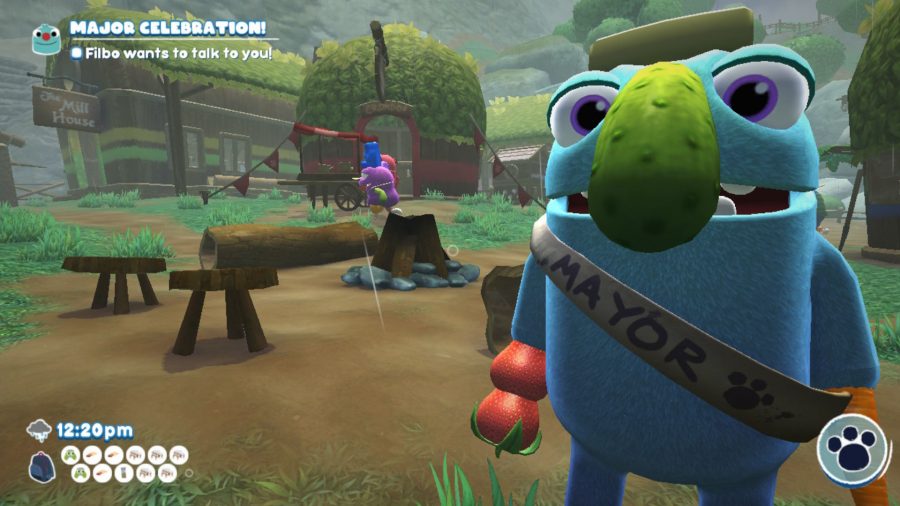 The one hiccup I have with this sort of gameplay loop, especially towards the latter part of the game, is that the missions set by the Grumpuses can get a little repetitive. While questing is good fun for the most part, I did start to develop a sense of fatigue concerning the “collect two of these Bugsnax” or “get the Bugsnak to do the thing” objectives that take up a decent chunk of the game’s missions.

Fortunately, it’s never quite repetitive enough to become mundane, and there are different sorts of missions to complete, provided you pick up some sidequests. It also helps that completing missions for certain characters unlocks an encounter with one of four boss Bugsnax, and these more complicated catching quests are a refreshing challenge away from the norm.

The investigative element of Bugsnax, much like the catching component, is a little here or there too, though it still hits more than it misses. Having landed on Bugsnax Island, you need to help Filbo find the missing residents, especially Elizabert Megafig, the island’s informal founder. As the narrative slowly unfolds, you realize that finding Elizabert is the biggest piece of puzzle pie, and you need the help of all the other Grumpuses to locate her. 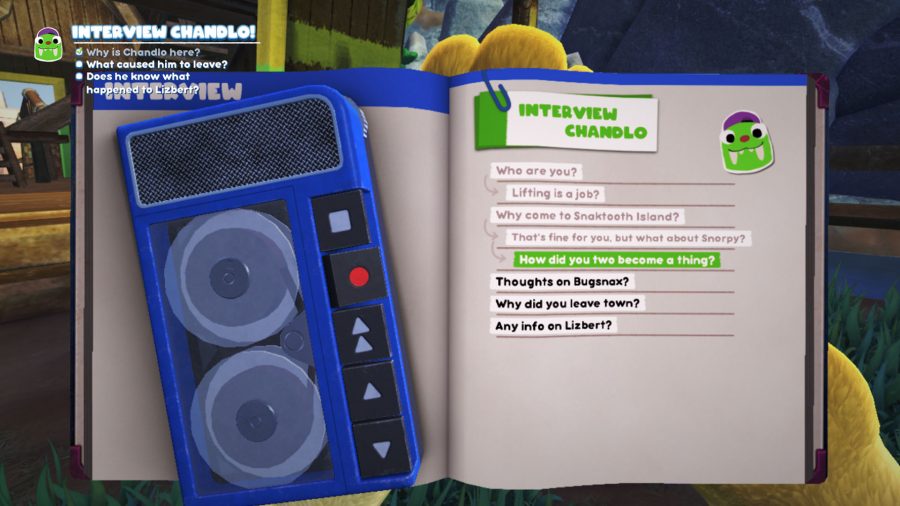 While getting to know the Grumpuses is, of course, at the core of the game, the tiring mission loop and some hazy pacing towards the two-thirds marker make the approach to the climax a bit of a slog. Still, the high-stakes and action setpieces you eventually arrive at make this seem worthwhile, and if you want to make it out the right way, entirely necessary.

That’s the real beauty behind the Bugsnax. I already miss Filbo. I miss Wambus and Trixie too.

The world that all of this takes place in is as vivid and bright as you’ll find in an adventure game on Switch, with multiple biomes teeming with tasty treats. These environments aren’t forthcoming on secret areas and easter eggs like you might expect to find, but much like New Pokémon Snap, it’s the creatures and their habits that occupy the awe and wonder component in Bugsnax.

Before rounding things up, I have to go back to talking about the ending, THAT ending, so skip a couple of paragraphs down if you want to so save yourself the surprise. Ready? Ok. So, Bugsnax is kind of a horror game. Kind of. I’m going to skip the juicy story bits, but essentially, the Bugsnax don’t work, they just make it worse. They also might kill you, given the opportunity. 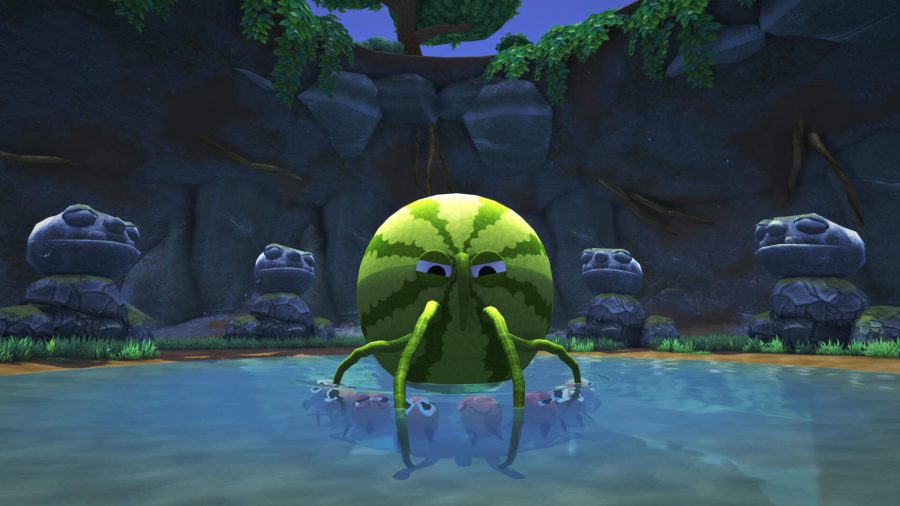 The dramatic twist at the crux of the game also dials home the most important part of Bugsnax, the bit that you least expect to have you hooked, your relationship with the Grumpuses. The friendships you forge are laid on the line, and only those who truly embrace living the community life will reap the benefits of a satisfying ending, and a post-credits cutscene too.

In terms of performance on Switch, I found no major problems during my 20+ hours with Bugsnax. The loading screens are bordering on a little long, but bar that, I had no issues with the frame rate, be it in docked or in handheld mode, or any other facet of the general playability of the game.

All in all, I had a great time with Bugsnax, and it achieved everything I’d expected of it. cool monster? tick. Elaborate world design? tick. Fulfilling narrative? Big old tick, the biggest of ticks. You don’t need me to tell you that that’s an impressive checklist. 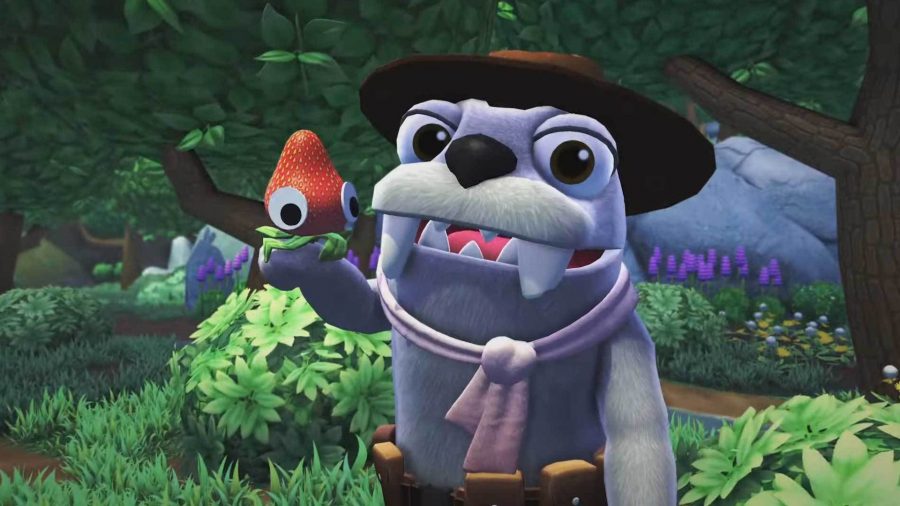 But in all honesty, if I can get a little sincere here, it’s how the game gets you to think about yourself, your friends, and the world around you. That’s the real beauty behind the Bugsnax. I already miss Filbo. I miss Wambus and Trixie too. And all this wouldn’t be so hard, if it wasn’t for the fact that after spending so much time together, I get the feeling they might miss me too, and I just can’t stand the thought of a sad Grumpus.

So play it, embrace it, leave behind your expectations and get your hands on the first ticket out to Bugsnax Island. I can almost guarantee that you’ll come back a different person, with a belly bursting from treats, and a heart heavy with love.