Winning in Among Us as the imposter is quite like poker in many ways: it takes confidence, composure, self-awareness, and a high level of game knowledge. And maybe just a pinch of luck.

Playing the part of an innocent crewmate requires you to know each of Among Us’s maps inside-out – being caught loitering at the wrong task station could be the difference between victory and an untimely ejection into deep space. However, good map knowledge is extremely useful for crewmates too.

Overall, whether you’re trying to respond as efficiently as possible to a reactor failure, or if you need to make a swift exit after murdering another player, it pays to know the three maps – Skeld, Mira HQ, and Polus – like the back of your hand. This guide should give you a good idea of what to expect from each map and might even save your neck in a pinch – if you find yourself in a locked room with a hungry-looking crewmate, don’t say we didn’t warn you… 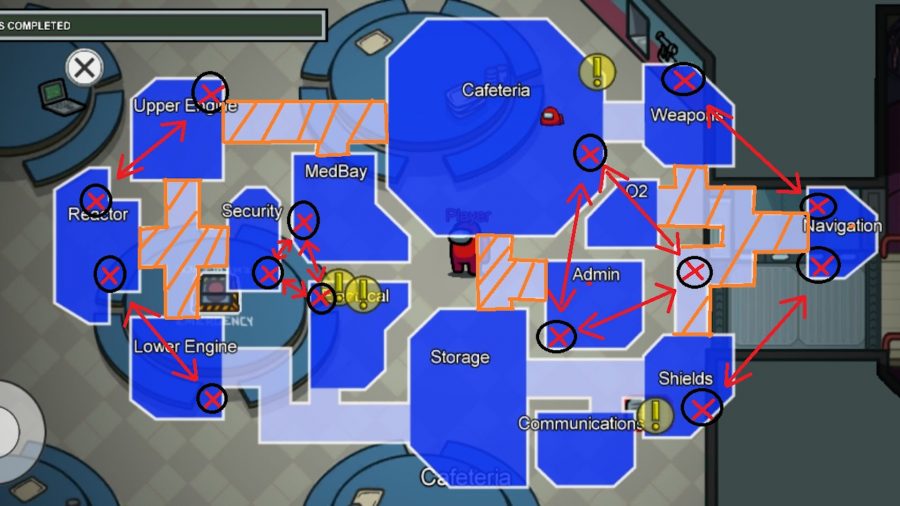 This modestly-sized sci-fi spacecraft is likely the best place to find your sea legs in Among Us. Skeld contains fourteen vents, which the imposter can use to move around the map quickly – these are marked as a red ‘X’ on our map circled in black. Four of Skeld’s corridors are monitored by security cameras and players can view real-time footage in the security room in the west section, which can be a good way to catch an imposter in the act. These are indicated by the orange sections on our map.

Skeld also contains four ‘visual’ tasks, which immediately signify to any onlookers that a player is definitely an innocent crewmate: emptying the garbage chute, getting a scan in the MedBay, clearing asteroids in the Weapons department, and priming the ship’s shields. As the imposter, you need to be careful: loitering in one of these areas for too long without triggering one of these visual cues could be a dead giveaway to other players.

Among Us allows you to call Emergency Meetings, where you and other players can debate who to eject into space. To do this, you can raise the alarm after spotting a dead body or go to the cafeteria in the north of the map and push the large central button.

The imposter has a variety of ways to sabotage other players in Skeld. They can shut down the ship’s oxygen supplies, which crewmates must then manually restore at O2 stations on the map (the locations of which are indicated by large yellow arrows on the screen). The doors to the Lower and Upper Engine, Security, Electrical, the MedBay, Storage, and the Cafeteria can be temporarily locked. Disabling Communications hides the task list from crewmates, whilst the lightning symbol will reduce their visibility. Finally, the imposter can trigger a reactor meltdown, which requires two crewmates to go to the reactor area to save the ship. 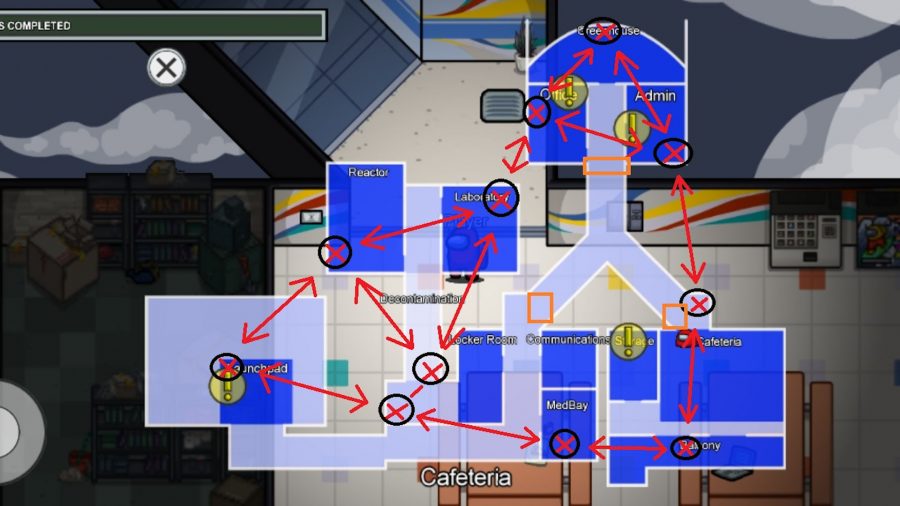 This map, which takes place on the top floor of a lavish skyscraper, is the smallest of the bunch. It doesn’t have security cameras, swapping this mechanic for three sensors at each end of the three-pronged glass bridge on the east side of the map. Crossing one of these sensors – marked by orange squares on our map – creates an entry in the doorlog, located in the Communications room just below the bottom left fork of the bridge. However, these sensors have a cooldown, meaning you can intentionally trigger one before crossing back over it, changing your direction and potentially misleading players trying to track your movements.

The imposter can move around extremely quickly using the eleven vents dotted around the map, leaving plenty of options for quick getaways. It’s important to bear in mind that the MedBay scan is the only visual task on this map – tasks like clearing asteroids don’t have a visual trigger here, unlike Skeld. The emergency meeting button is in the cafeteria in the south-east of the map. Sabotage options are the same for the imposter as in Skeld, although they are not able to lock any doors. Mira also features a decontamination chamber, which stops crewmates in their tracks for a few crucial seconds – perhaps when they’re on their way to disable the sabotaged reactor. 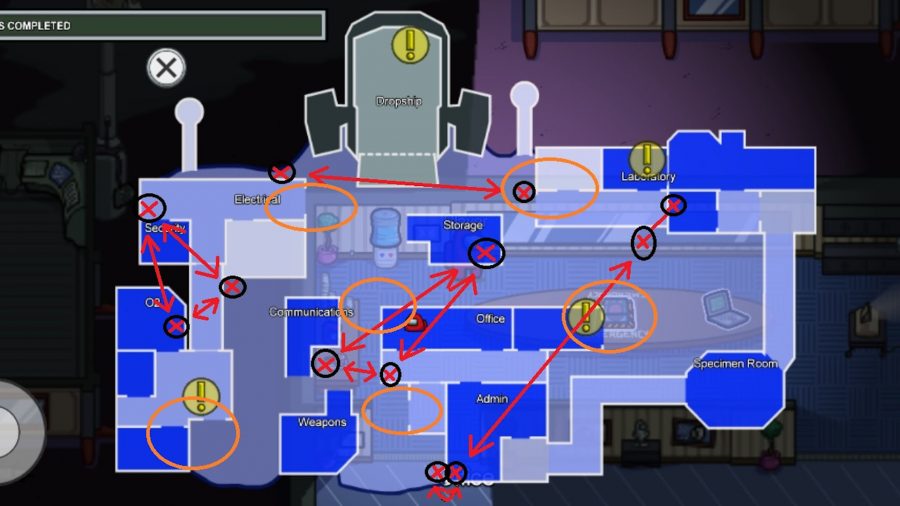 This frozen hellscape is a sprawling map for players to explore, contrasting lakes of molten lava with snow flurries, frozen crewmates, and a frankly worrying specimen chamber. Security cameras are back, marked with orange circles on our map. This gives you a rough overview of Polus from six different viewpoints and you can view it from the central office.

The twelve vents – stylised as holes in the ground on Polus – offer the Imposter less total coverage than Mira, although decontamination chambers make an appearance, slowing crewmembers down as they complete tasks. Additionally, you can lock doors in the O2, Electrical, Storage, Laboratory, Office, Communications, and Weapons sectors, giving the Imposter more opportunities to trap players than in Mira.

The imposter can disable Polus’s seismic stabilisers as one of their sabotage options, which is mechanically similar to reactor meltdowns in the previous maps – two crewmates must go to opposite sides of the map to prevent an instant failure. Polus also has just two visual tasks to keep in mind – clearing asteroids and MedBay scans. The canteen present in previous maps has been replaced by a central office, where players can call emergency meetings and chuck each other into lava.

Hopefully this helps you get the upper hand next time you boot up Among Us with your friends! If you’re just getting started, take a look at our Among Us character list to learn about them, then move onto our Among Us hats guide to check out all of the cosmetics on offer.